Everywhere you look, symbols are on display. Few symbols evoke more thought and emotion than the infinity design.  The notion of infinity is difficult for our minds to grasp, so a symbol denoting the idea needs to be one that can detach the human need of a feeling of finality.  The "horizontal 8" does just that, as no beginning or end can be found within its design.

The figure eight also symbolizes two opposing forces joining together in perfect union.  Both ovals are the same size, and are direct opposites of each other. However, for that fleeting moment in which they meet in the middle, a pure harmony exists.  Believe it or not, the motif was not created as an emblem of unity, eternity, or togetherness. The origin actually dates back to the 17th century and was forged for quite a different purpose. 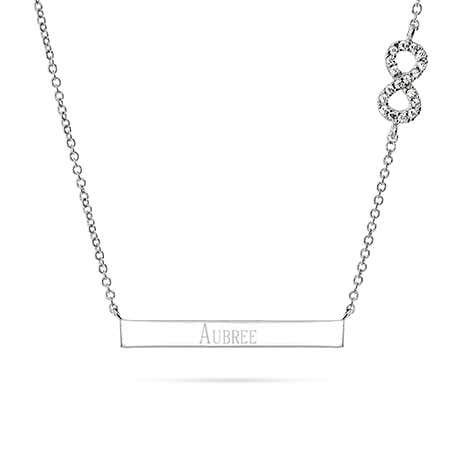 History of the Infinity Symbol

The infinity symbol is also known as a lemniscate.  Modernly, a variation of the ouroboros is the clean, interwoven emblem we are accustomed to seeing.  The ouroboros is a representation of a snake eating its own tail.  However, the design has evolved over the years.  First used as a way to define value in the sciences, mathematician John Wallis is credited with first using the motif in 1655.  The original token was slightly different than the one we see in modern times.  It is speculated that the design of the lemniscate was derived as a variation of one of two ancient emblems.  The Roman Numeral representing the number one thousand is similar in appearance, and it was often used by scholars to denote "many." Another school of thought is that the symbol is a modification of the Greek symbol, omega, which is the last letter in the Greek alphabet.  Both of these concepts are plausible, and we will never know the initial inspiration of the current lemniscate.

The Infinity Symbol as an Accessory

What better way to show an undying passion for your loved one than by giving them a token of an unending love? Before taking the vow of marriage, show them you are committed eternally with an infinity necklace. If you are already married, reaffirm your "till death do us part" pledge with a beautiful infinity ring. The lemniscate can extend into platonic love, as well. Gift it to a friend who is moving away, or a child who is graduating and making their way into the fast-paced reality of adulthood. However you decide to wear or gift your infinity token, let the world know that not only is it a symbol of that which will never die, but it is also a token of how our differences should bring us together and enrich the world around us.

Find the perfect infinity symbol necklaces or ring to give to a loved one today.